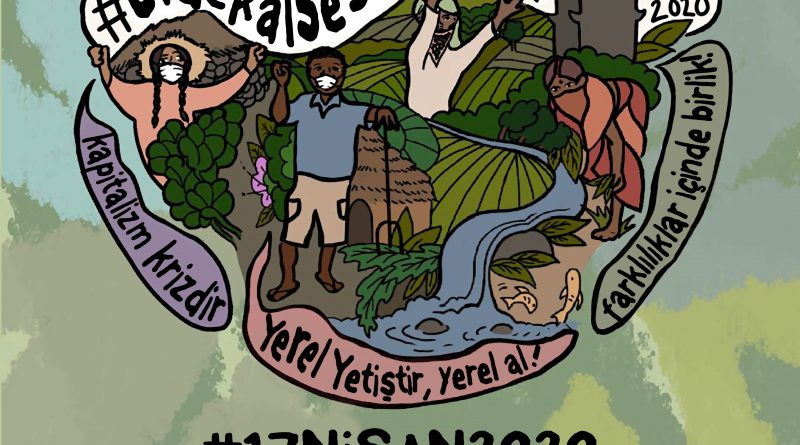 We welcome the 17th April, the International Day of Peasants’ Struggle in the quarantine days of COVID-19 pandemic worldwide. Spreading all over the world in a very short period of time, COVID-19 has pointed out that destroying of the nature, ruining of the ecological system, and the distruptive effects of the industrial agriculture prefigure new potential epidemics. Besides the fact that the corporate food system plays a major role in the burst of the epidemics, we are convinced that the unhealthy and the low nutritional value food they have produced have weakened the immune systems and made the people incapacitated against diseases. It is therefore inevitable from now on to turn towards a system that is based on local production, biodiversity, and agroecology. The pity is that the food problem, as revealed by the pandemic all over the world, has only proven to the entire world how fundamental is the role to feed the humanity of the peasants and small farmers, whose lands have been seized by the capital owners, whose rights to land have been revoked, and who have been left dispossessed. It has gained further urgency that each country in the world should enact agricultural reforms and extend the ecological peasant farming in an aim to establish the food sovereignty to replace the corporate driven food system.

La Via Campesina, Çiftçiler Sendikası being a member as well, has fought against the corporate food system since the day of inception and defended the rights of farmers and other rural workers. On the very date of April 17, 1996 in Brazil, farmers of MST – Landless Rural Workers’ Movement – were attacked by both the official and private security forces during their legal struggle to reach land and 19 of them were massacred cruelly. La Via Campesina, the global organization of farmers, has declared the day of 17 April to be the Farmers’ Struggle Day both to commemorate the farmers massacred and to raise the fight against the corporate driven food system. Since then, every 17 April is treated as the International Struggle Day of Farmers and commemorated with various activites and actions on a common agenda. This year, the main agenda of the week of 17 April has been announced to expose political, social and economical health crisis which has deepened and has become more visible as a result of COVID-19 pandemic, and to have all countries accept and secure the United Nations’ Declaration of Rights of Peasants and Other People Working in Rural Areas, 2018.

Those who are left unprotected in terms of health and economical benefits are the people living in rural areas, the farmers, the seasonal agricultural workers, and the urban working classes. Under these economical crisis conditions deepened by the pandemic, incentives are intended to go to capital owners and corporations while immediate measures to cover the majority of the population fall short.

There is no solution other than building up the solidarity between rural and urban circles and forming and developing class alliances. In joining our breaths to give voice to our demands, we have to be in a certain solidarity and better attached to each other to survive the prevailing difficulties. We have to throw off the masks of agribusiness, pharmaceutical companies and similar global companies that grease their greed to turn even the current crisis into an opportunity for more profit. As a response to the corporations’ desire for full control of the food, we can exercise creative practices at our homes and farms and can turn our windows, gardens, land pieces into a field of action. In building up the solidarity, we can plan how to enable sharing with our neighbors and friends and how to help the most vulnerable sections of the population.

In conclusion, we say that:

– we should consume the products of local peasant cooperatives and local production communities, not those of the big markets.

– mechanisms should be created to ensure the the products of small scale farmers and peasants that produce landraces using local seeds are transferred to the consumers and we, as consumers as well, should prefer such products.

– we should do the shopping at the neighbor’s shop. We should strengthen the local economy.

Stay home but not silent!